St. Sava (Свети Сава) - The Patron Saint of Our Parish 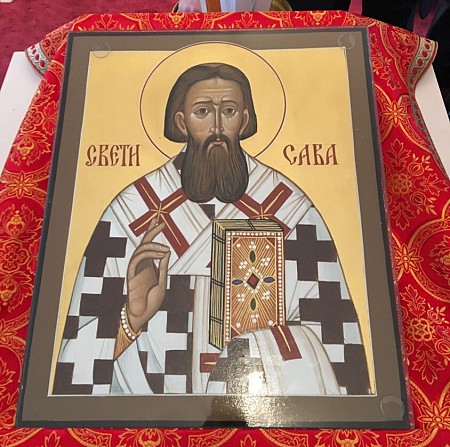 Born Prince Rastko Nemanjic, son of the Serbian ruler and founder of the Serbian medieval state Stefan Nemanja, St. Sava became the first Patriarch of Serbia (1219-1233) and is an important Saint in the Serbian Orthodox Church.

As a young boy, Rastko left home to join the Orthodox monastic colony on Mount Athos and was given the name Sava. In 1197 his father, King Stefan Nemanja, joined him. In 1198 they moved to and restored the abandoned monastery Hilandar, which was at that time the center of Serbian Orthodox monastic life.

St. Sava's father took the monastic vows under the name Simeon, and died in Hilandar on February 13, 1200. He is also canonized a saint of the Church.

After his father's death, Sava retreated to an ascetic monastery in Kareya which he built himself in 1199. He also wrote the Kareya typicon both for Hilandar and for the monastery of ascetism. The last typicon is inscribed into the marble board at the ascetic monastery, which today also exists there. He stayed on Athos until the end of 1207, when he persuaded the Patriarch of Constantinople to elevate him to the position of first Serbian archbishop, thereby establishing the independence of the archbishopric of the Serbian Orthodox Church in the year 1219.

Saint Sava is celebrated as the founder of the independent Serbian Orthodox Church and as the patron saint of education and medicine among Serbs. Since the 1830s, Saint Sava has become the patron Saint of Serbian schools and schoolchildren. On his feast day, students partake in recitals in Church.

After participating in the blessing of the waters in January of 1235, St. Sava developed a cough that progressed into pneumonia. He died of pneumonia in the evening between Saturday and Sunday, January 14, 1235 and was buried at the Cathedral of the Holy Forty Martyrs in Trnovo. His relics remained in Trnovo until May 6, 1237, when his sacred bones were moved to the monastery Mileseva in southern Serbia. Three-hundred and sixty years later the Ottoman Turks burned his relics on the main square in Belgrade.

The Cathedral of Saint Sava in Belgrade is the largest active Orthodox temple in the world today. It was built on the site where his holy relics were burned.

Let us sing with love To Saint Sava. Serb churches and schools Glorify Him!

That all Serb lands Can soon be united Sun of freedom and righteousness To shine to us at once:

To live in love and harmony Help us, O Holy Father Sava, Hearken the voice of the people, The Serb nation!

Confessions can also be made by appointment with Fr. Stevo.

Church School: 9:30am on Sundays